Frank Nyitray, a locations support worker for Heile Film Support, is a real life and online troll who has been harassing a woman  working in the Toronto film industry for several years. Frank stalks this woman and others, photographing and documenting her movements and stalking her at political demonstrations. He then writes fake news articles about her full of false accusations and has even posted her address online. Despite his toxic behaviour, Helie stands behind him and his harassment of his co-worker (as they are often working on the same set)

Frank is involved with the “Wolf Pack” a far right extremist anti-Muslim organization and takes pictures of anti-racist and anti-Islamophobia activists in order to help the Wolf Pack identify and attack these people.   GTA Wolf Pack is the Toronto branch of the Quebec-based “La Meute” a secretive, extremist far-right paramilitary group.

WHAT CAN YOU DO?

Call Heilie Film Support at (416) 703-0404 and/or use their online form at http://heliefilmsupport.com/main/contact-us/ and tell them to tell Frank to stop harassing film crew and remove his attacks from his website if he wants to stay in the industry.  If you’re in the film industry, refuse to have Frank on your set. If you ever see him on set with a camera immediately alert the A/D or someone else in authority. He owns high quality cameras and may be illicitly freelancing as a paparazzi on the side. Warn others about him. If you work for another company, warn them about Frank, tell them you don’t want him on your set, and ask them to complain to Heilie.

Apart from his campaigns of personal harassment, as stated above, Frank N. is dishonest and a publisher of fake news.  Like most propogandists he twists things and slashes images.  The latest blog entry on his blog displays this.  He claims ANTIFA (Anti-fascist organizers) are utilizing weapons for instance and posts this picture:

Little does Frank know that we’ve already seen the full image of this from a smarter, more honest, less delusional blog (one that doesn’t have a colour palette that gives you a headache after five minutes).

This photo depicts a member of the 111%ers in Alberta, a far right wing anti-immigrant group.  They are the ones carrying these shock stick weapons to protests – not ANTIFA.  Frank is, as usual, lying and slandering.

Frank’s blog has been taken down recently after a few extremely unhinged posts. In one post he literally calls for people to murder Black Lives Matter activists by running them over with cars: 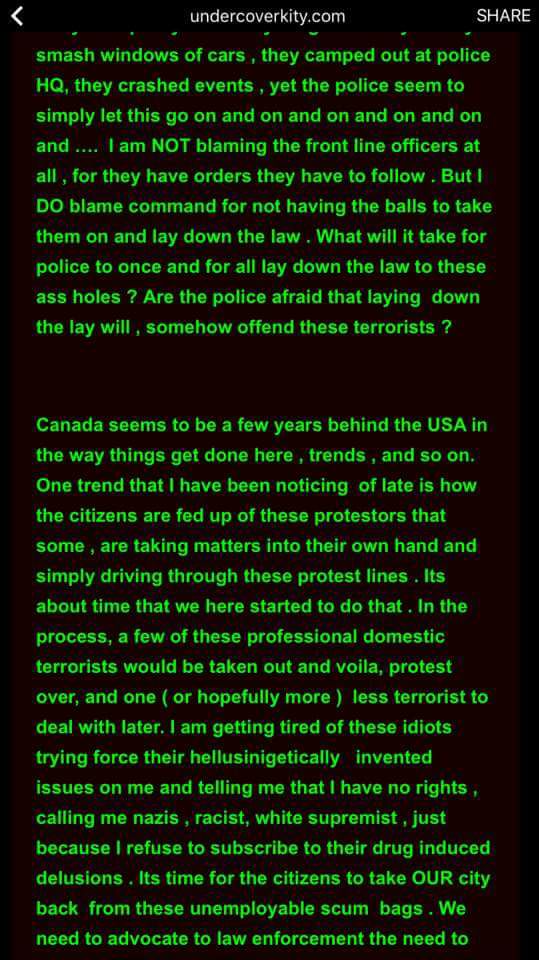 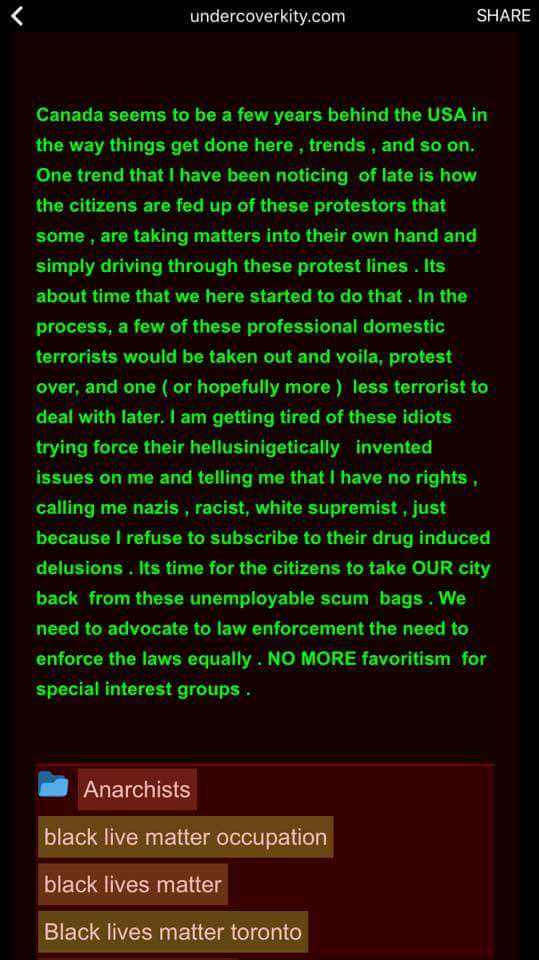 This is a new low even for Frank. The blog was completely removed from the internet shortly after. We are unsure of why, but we theorize that it may have been ordered by law enforcement as it is literally incitement to murder. Either that or Frank has changed his ways, which is unlikely because he is still being spotted taking pictures of people at protests against racism.

Thankfully, thanks to his own recklessness and violent impulses, his blog no longer exists and can’t slander people.

View all posts by torontotrollgallery